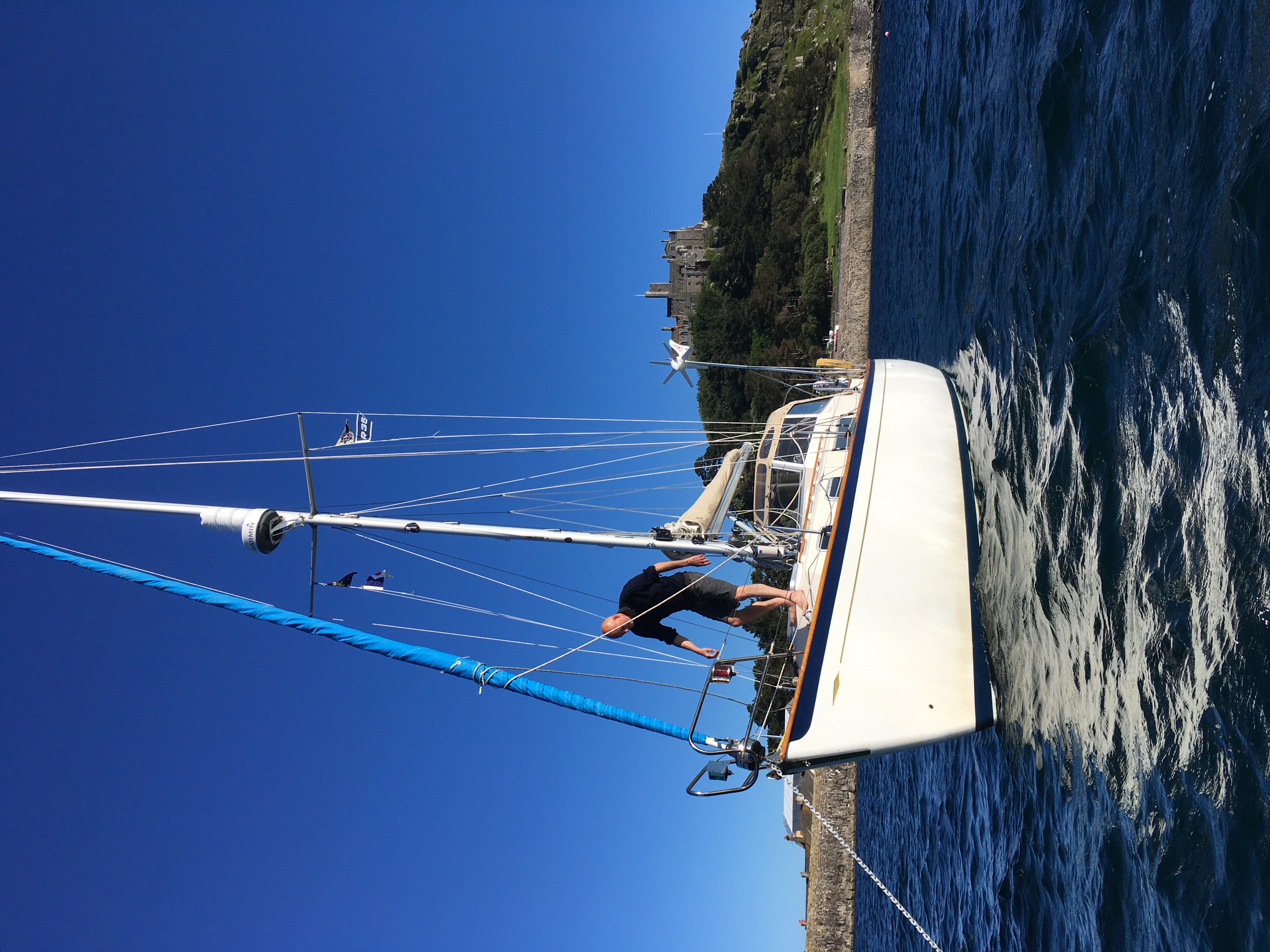 For five weeks in the summer of 2021, I took a break. With a series of friends and family I took our boat from Suffolk to the Isles of Scilly and back. Most of the time we explored Cornwall, the fishing villages, small harbours and a few commercial centres. The journey brought variety, as the ferocity of the tidal race off the Lizard contrasted with the tranquil Truro river just as time spent with family contrasted with time spent alone and with friends. As I returned from the trip, I started to reflect on what the experience had taught me. Three themes emerged, all at different speeds. 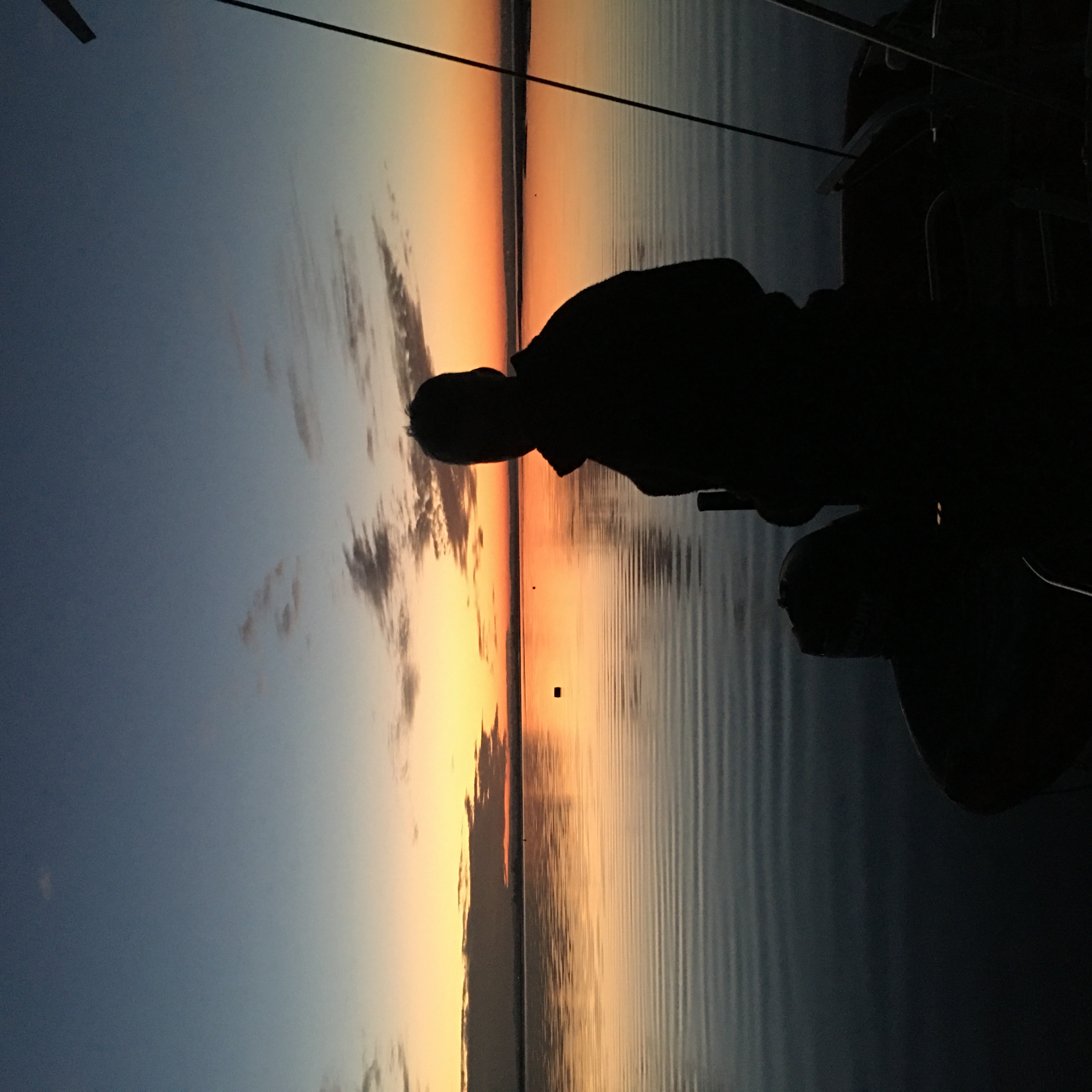 Safety travels with you

In a boat you have a choice. You can either be in harbour or you can be at sea. When you are in harbour you are safe from the elements. In a modern harbour all the amenities are also at hand. You can get a shower and you can go to the shops. At sea it’s very different. Once you leave the safety of the harbour, the sea can kick up, there’s no shelter from the wind and that nearby supermarket is just a memory.

This is the choice I faced again and again. I didn’t want to stay anywhere for very long but there was an obvious conflict as the adventurer in me was stuck with a nesting bird that insisted on building structure and relationships wherever it went. This ready to curl up bird got to know the harbourmaster, enjoyed going into the shop knowing where everything was and was even starting to make friends with the local fishermen. Whenever the time to move on came, the moving brought with it an element of regret. Against the possible gain of leaving for somewhere new, the loss of what I’d be leaving behind figured large. 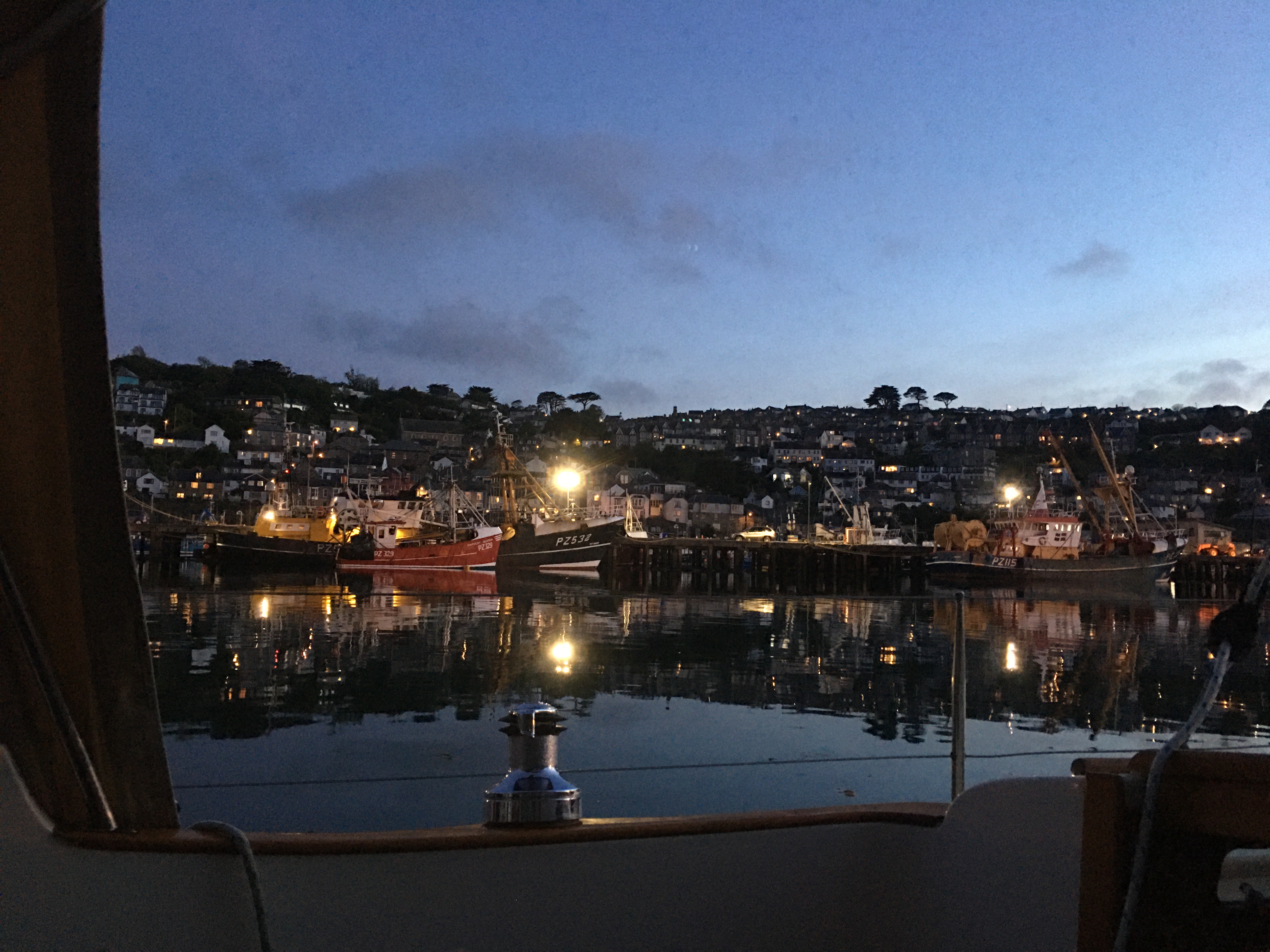 It was only the act of leaving itself that stretched and then broke the elastic. With the aid of physical distance, I’d accept that we’d left and though everything was still there, the attachment I had was gone. We were now at sea and I got comfortable here. Sometimes we’d be away for days, sailing overnight or dropping the anchor and after a few days we’d start to yearn for the pleasures of the shore. The offers made by the ideal harbour, perhaps the joy of uninterrupted sleep or the fresh rinse offered by a proper shower, started to have more and more of a draw. At some point then, I’d be checking up on our options in the pilot book, the boat good harbour guide, and we’d be heading towards a harbour. It was then though, that another inhibition struck.

I noticed it a mile or so off Mevagissey harbour. Just as I was heading the boat for port and the pleasures I knew were there, I also got an uncomfortable feeling. Where would we tie up, would the berthing prove difficult, would I even mess up the act of docking, what would the harbour master be like, would there even be a space? All the uncertainty of the new harbour piled in. I remembered I had had this same feeling in Falmouth, Salcombe and Shoreham. All places that we’d been and subsequently felt at home in, had also brought up this feeling as I approached them. I’d come to feel safe in all these places yet as I approached each new place this uncomfortable feeling consistently emerged in a bid, it seemed, to warn me off.

I was by now noticing a pattern however. In every place, an hour after we’d berthed, how I felt changed entirely. Now instead of anxiously looking in, unsure of the place, I was now watching others come in, knowing what was here. I’d get up to help a newly arriving boat, offering to take their ropes, welcoming them this harbour where they saw me as a resident and themselves as the newcomer. My perspective had entirely changed, I was now comfortably looking out, the open antenna to all might happen in this place fully engaged. The nesting bird had returned and my comfortable bed was being made.

I saw that my sense of safety was a thing I carried with me. Safety was a thing that I was capable of creating, both for myself and, perhaps most crucially, for others. If I actively embraced the comfort and discomfort we all felt, I created a community that worked together to build this comfort for sense of safety for all. We were on a boat after all and ultimately this ship was designed to be at sea. I could see that sometimes the vessel itself more geared for that task than the minds of the crew allowed it to be.

In the evenings we’d often find ourselves sitting in the cockpit of the boat chatting. The conversation occupied us but what anchored us was the view. It wasn’t one view because the light kept changing and things kept happening. Dusk wasn’t just a switching off of lights, it was a few hours of gradual change. The shadows darkened just as the surface of the water changed, as the fish started to move. Never in my life have I spent so many quiet “Oh, my god, look at that…”, romantic moments alone with another male friend.

As I looked at the view what took my breath away was how much there was in it. I could look at what I saw as a whole, believing it had somehow captured it, that I’d understood it. By staying with it though, the conceit of this mistake became obvious. The weight of information here was overwhelming. It wasn’t just the constant change, it was the complexity of every bit of the picture at every moment. I could photograph the trees at the top of the ridge but if I had wanted to draw them I needed to know more about them. What shape did they make and with what subtle changes of colour did they now present? All this information was there if only I sought it out. When I did, I was drawn in, in awe of the richness already in front of me. The problem with life is not that there is no beauty, rather there is so much that we shut the beauty out. 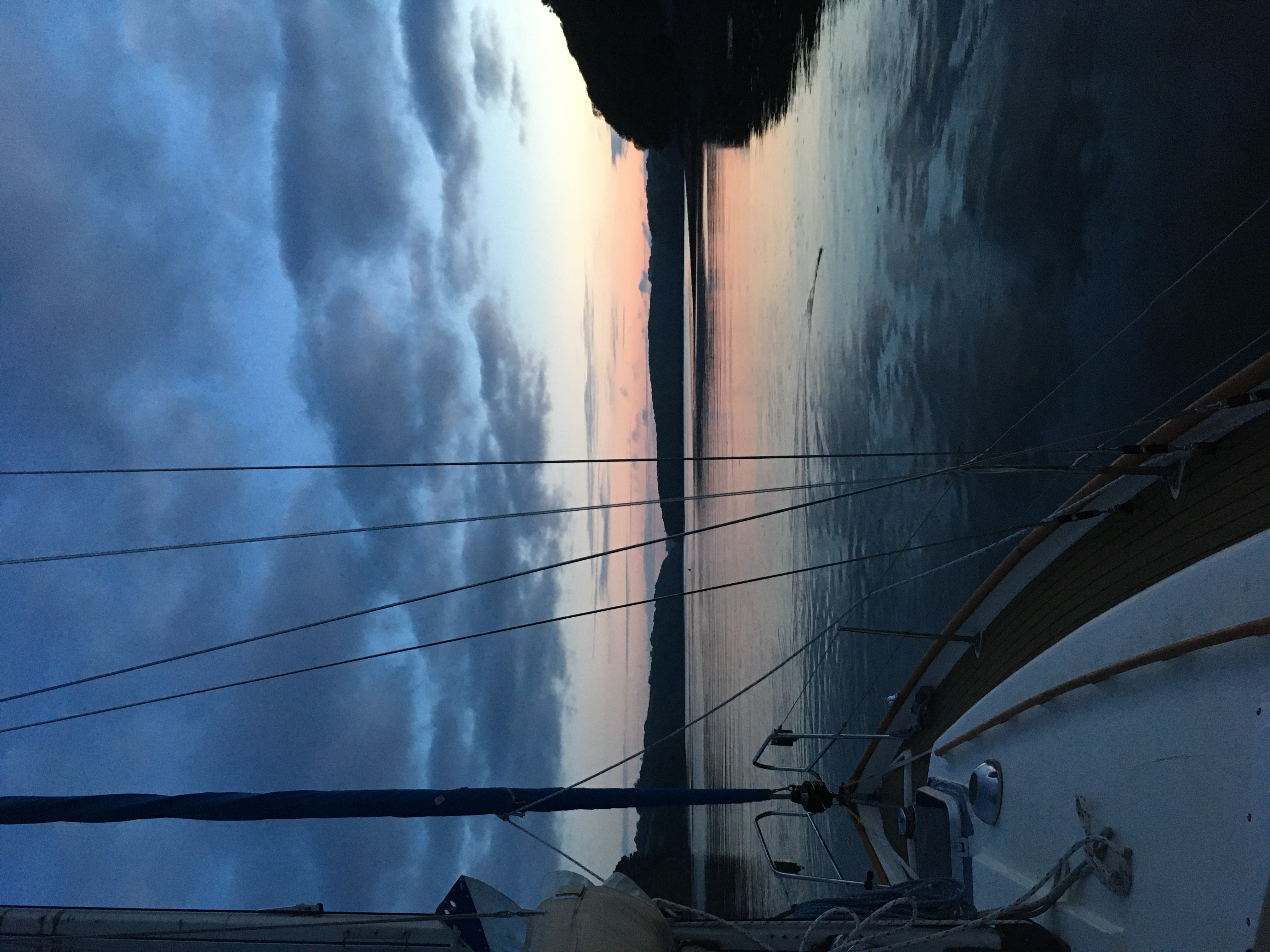 Here, the traveller has a different perspective from the static occupant of a fixed position. I realised that I was more appreciative of the view because it was new. It was not my usual. The danger of my usual is that I allow myself the conceit of simplicity more often. Looking out the window of my house tells my mind short-circuits itself into knowing that I’ve seen something like this scene before. “It’s a sunset”, “it’s some trees”. This easy shortcut away from the total beguiling awe of the moment allows me to avoid it completely, to race on to the next thing to be done. If this was true of the scenery how much was it true of the way I appreciated the people as well? Had I become overly short-circuited and was I missing out on beauty elsewhere I started to wonder.

It’s true that I was spoilt and in these evenings even a picture could prove that this bit of the world was beautiful. What I realised coming back to my everyday though, is that this is also true of every other bit of the world and every interaction we have with every part of it. The everyway world is rich with beauty. Every conversation is rich with information if only we can take it in and appreciate it. The challenge is that the information overload of the everyday can be overwhelming. One response to that challenge is to simplify it down. An alternative response is to see that beauty is everywhere. Yes, it can be overwhelming but if the beauty is there, why not let it in?

We’ve just moved house and in the process of moving I’ve started to notice how much of our house contents are suddenly homeless. When a new object is brought into the lair as an acquisition or maybe even a gift, it is a novelty and a home is eventually found for even if it is completely useless. In a slow process all these objects are secreted away in random places, under the stairs, in the eaves at the back of cupboards, where they can hide away forever.

In the house removal process the tide goes out and these objects are exposed. Here today, in the new house, I notice one of the clusters of now homeless objects. There are a collection of vases and bowls hanging out in a corner of the living room. If they stay there much longer they’ll be building a fire and gathering around the hearth to tell each other their life stories. Gathered together these objects are pressing on me. They demand something. I could just be the fondue set demanding a home but it could also be the picture with the cracked glass that needs a repair. All these objects have demands, even if the need they have is just a decision. Is it time to get rid of me perhaps? That is then complicated. Someone else in the family may care for it more than I do. Does this particular trinket have a value for others or can I give it away, sell it or ditch it? 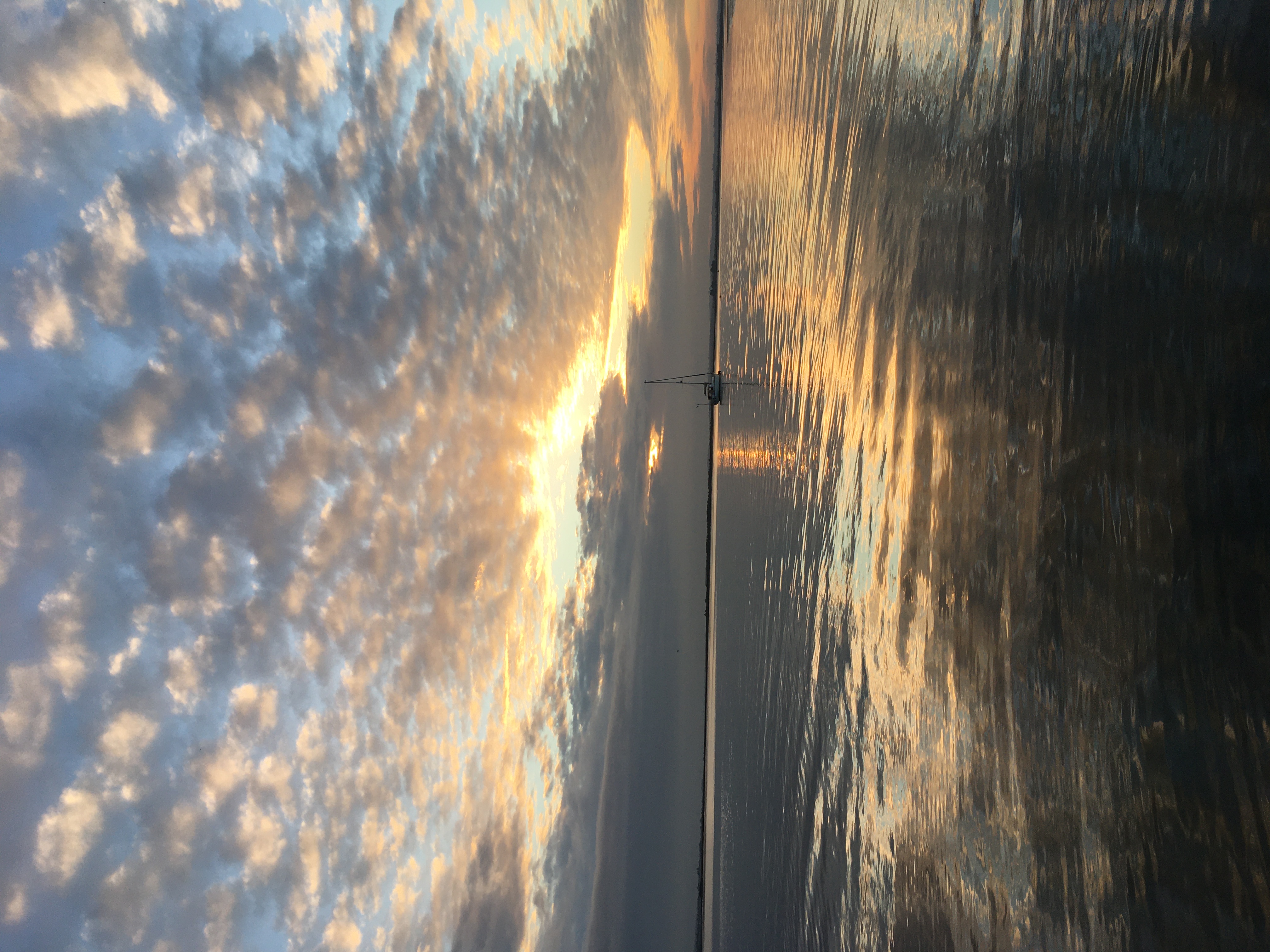 On a boat, there are no jobless objects, life is stripped to essentials to an extent that having more than the spoons you absolutely need is dangerous. Without the luxury of extras, the two tea spoons we have need to be looked after and, in particular, washed up and put back in their place, rather than left lying around. Without that attention, there would be nothing to hoick out the tea bag from your mug on the next round.

Before introducing a new object into this space I ask where it is going to go and also what two jobs it could do. An object that only has one use is immediately on a warning. Are you so special that can take space here, resting there in the luxury of only being brought out on rare occasions? Things hidden in lockers, that underwater torch perhaps, that aren’t generally used are in danger of being neglected and unmaintained, the batteries will be flat when they are really needed. Here, objects exist on tenterhooks. If your purpose is unclear, perhaps like the second corkscrew, you are but a short distance from being taken ashore to an uncertain future but one where you are more likely to be safe, hidden away in some drawer in the house that is already weighed down with too many objects.

When I leave the boat and come back to shore, I realise that this is not just a physical thing, it is a psychic one also. Here, ashore, there are more things to worry about than I have been used to. Everything is more complicated. Things need doing in the house and every thing begets more things. Each thing has more responsibility, decisions and tasks connected to it. The more things one has the more maintenance tasks are required. The pure moving around of all these things is a thing in itself. Life can become an accumulation of objects, so much so that the accumulation seems to be a key part of what we seek in life.

Standing on the precipice of thingdom, I could see that it was not the acquisition but the shedding of these things that led to ease and satisfaction. My third resolution is to continue the process of removal; a word itself that means a cutting of ties, a taking away. In this questioning and letting go of unnecessary things, lies a balm for the soul.