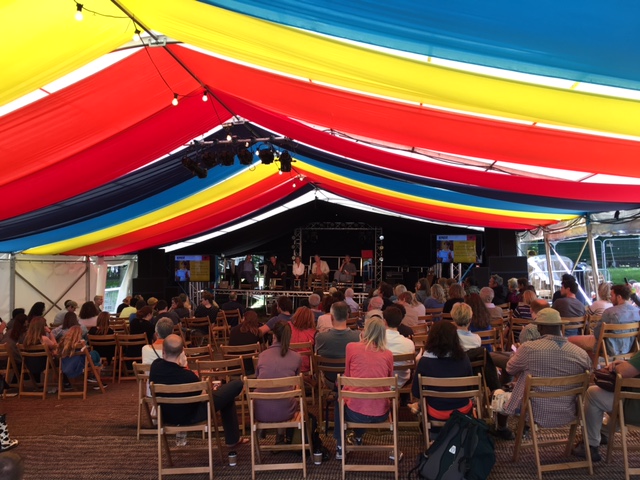 It was the final day of a three day media and literary festival. I was tired but my head was buzzing with ideas. Part of me was asking “Why am I still here?” Another part of me just wanted to hang around. Instead of thinking of such questions any more, I stopped at the back of a big tent and decided to listen to what was being said on stage.

The conversation was about how journalists operate in a war zones. What I heard, more than anything, was just how dangerous it was. It wasn’t so much about the art of reporting, it was more about surviving. A participant shared how a tourniquet applied quickly to a severed limb had stopped a wounded cameraman from bleeding to death. He then joked about how it had led him to a rather grizzly programme idea. Journalists!

The discussion turned to the use of drones and a few observations were made about the issues they raised, their accuracy and the incidental casualties they tended to leave in their wake. Drones weren’t much loved. The tent, one could see, was against drones.

At that point a lone voice piped up. A man in the audience made the point that in in his experience American drones were highly accurate. In a conflict he had been reporting recently, the locals trusted them to do their job. He said that the people he had worked with locally had felt quite comfortable with these drones flying safely past their homes and on to their targets.

The man in the crowd was immediately turned on by two speakers from the stage. Even more importantly the mood in the audience was clearly against him. One speaker, a cameraman, had grown up in the Middle East and spoke from bitter experience. He could vouch for drones being anything but safe. A second also spoke up against drones. In a moment the original point was crushed. Drones were clearly unsafe. The man was clearly wrong.

As someone with very little knowledge of what was right or wrong or who these people really were, I allowed myself to side with the crowd. That seemed right and as I left the tent as the event ended I went back into my life, with a view to be distrustful of drones. This would probably be my instinct anyway.

As I walked away from the tent, I saw a friend who I hadn’t seen at the festival before but who had been presenting at another tent. Tom and I started chatting and it must have been another five or ten minutes before someone else joined us who knew Tom. He looked liked a modern day Lawrence of Arabia, dressed in worn desert fatigues with a long red and white scarf around his neck. Before long, I realised this man, Sean, was the journalist who’d spoken out in favour of American drones.

As Sean and I spoke we picked up on the point he had made. In that moment I realised that Sean was not only an experienced war journalist but also a guy to be trusted. I liked him and he clearly had lots of experience with drones in war zones. I also realised that I had fallen into a trap. Not only that, the trap that I had fallen into had clearly been described in a workshop which I had been in immediately before I had joined the war zone conversation.

The trap was something I was familiar with already. It is the realisation that we all have our own perspective and that as a result we don’t see what is really there but rather what we would like or expect to be there. In the words of Anais Nin “We don’t see things as they are; we see them as we are”

The workshop had covered a range of ideas coming out of a book called “Principia Discordia”. The book had come out of an age of Californian free thinking in the 1960s and had spawned a project called “Operation Mindfuck”. Mindfuck sought to challenge established ideas of order and disorder. This project can now also be seen as the origin of the modern distortion of the truth that we now call the “post truth” world; where well organised and funded groups exploit our inability to see beyond our own little worlds for political means. Ironically, something that started as anarchistic fun ended up showing people who had commercially funded agendas, how easily this fabrication could be achieved.

One of the many ideas that I took away from the workshop was one from free thinking psychologist and explorer of psychedelic mushrooms, Timothy Leary. Leary invented the concept of the “Reality Tunnel”. This is the idea that we all construct or adopt a reality tunnel which we then live in. Once we have our tunnel, we then proceed to test everything we see against that tunnel, accepting everything that conforms to it and ignoring, at best, everything that might challenge it. The Reality Tunnel concept captures and perfectly names the point Nin makes in her quote, we tend to see things as we are or want them to be, rather than as they are.

The problem with our Reality Tunnels is that we can’t see them. We are blind to the fact that our perception is limited and what you don’t see isn’t there anyway, so good luck in finding it! As a result, we can walk straight past evidence that directly contradicts the simple story of what we want to believe to be true.

Talking to Sean, outside the tent, I realised that I had just missed something in my own blind spot that I should have seen inside the tent. I had literally walked from one session on blind spots into another one where a blind spot had come and hit me over the head. It was literally right after, but I still hadn’t seen it.

Even more importantly, I realised that the whole tent had fallen into the same trap. One of the things that the festival was set up to do, was to question the truth. As participants, we were fed up with situations where the powerful, the proprietors of the media and the politicians, perverted that truth for their own ends.

It had just been shown that we were all just as guilty of viewing truth from within our own Reality Tunnel. Instead of accepting Sean’s point of view as potentially valid, we had allowed it to be collectively dismissed in favour of what the group already believed.

In doing this we were, arguably free of commercial motive but otherwise no better than the commercial media owners that we complained about. We already had a story we believed and we quickly defaulted to a position where we defended it. In the process, we dismissed Sean’s contrary evidence.

At that moment I had to thank the coincidences of life for not only showing me this but also in keeping on knocking at my door when I first missed it.

I can only hope that next time I can see my Reality Tunnel more clearly. If I can do that, I might choose to jump out of it. I might even jump out of it in time.

But is that enough? Will I see it or will I just miss it again?

Instead, maybe its time to turn the question round.

Whenever you see something you disagree with, ask yourself “What Reality Tunnel might I be living in?